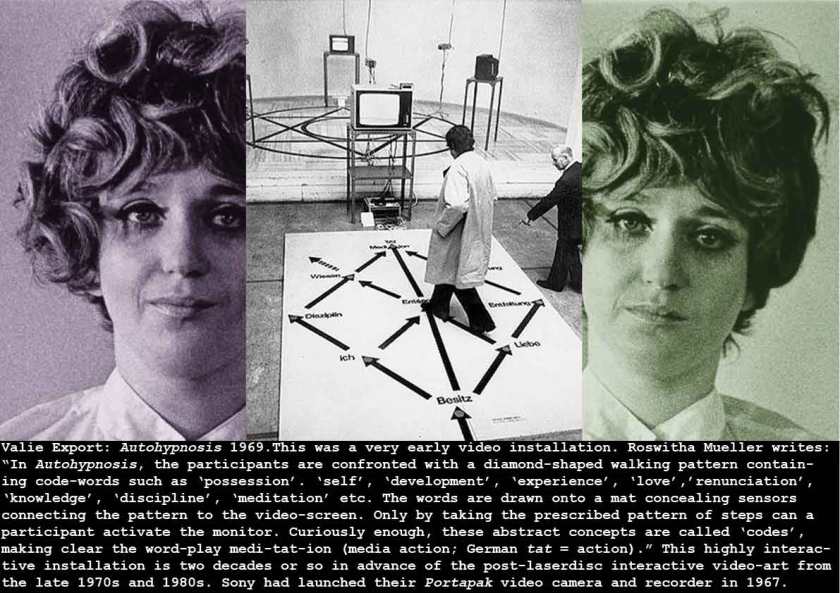 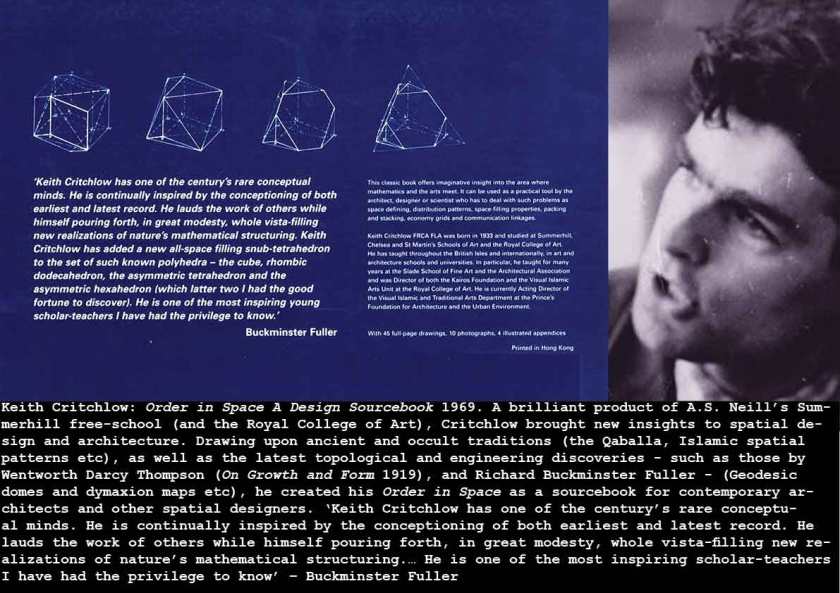 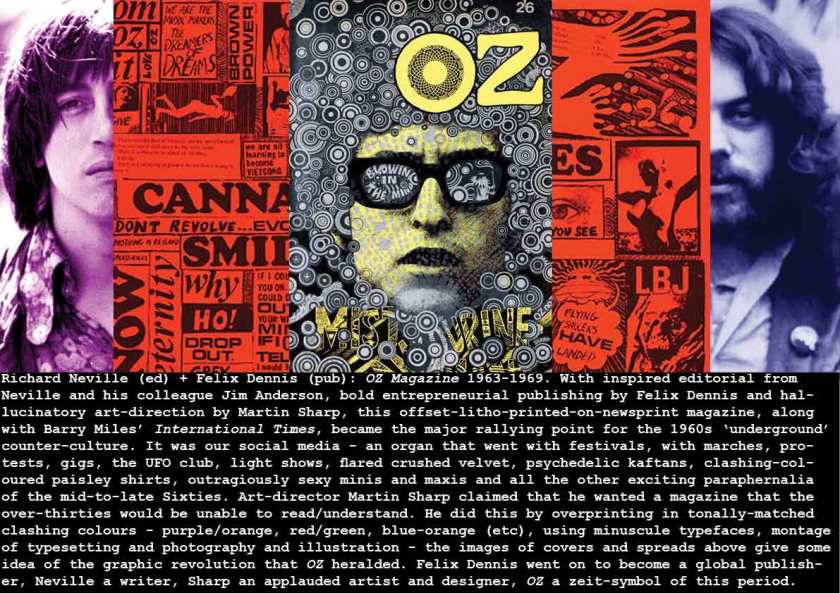 I did some illustrations for Oz in the late 1960s, and simultaneously I was discovering the places that the Oz editorial team, their mates and fellow travellers were hanging out – I remember the Baghdad House – middle-eastern-hippie flavoured cellar bar /restaurant, and the famous Cafe des Artistes (now the K-bar) – where everyone hung out – lots of comfortable sofas, cushions, tables for houkah pipes and other stuff – frequented occasionally by the Stones, Clapton, Harrison etc), the Picasso in the Kings Road, Mick Farren’s studio in Edith Grove, the Chelsea Arts Club, the Kings Road Pheasantry, the Prince of Wales in Notting Dale, Julies Bar nearby, and other sundry pubs and late-night drinking clubs. But at this time, outside Kensington and Chelsea, there were  ‘underground’ hotspots all over central London – Better Books (when Barry Miles was manager), Compendium Books in Camden Town, the Indica Gallery, Apple Corps in Saville Row, the Marquee  and 100 Clubs, the Speakeasy, the Roundhouse, Henekeys and Finches in the Portobello Road, and of course Finch’s The One Tun in  Sunny Goodge Street (and several other pubs in Fitzrovia), Arts Lab in Drury Lane, the ICA (as always), Gerry’s Bar and the French House (aka The York Minster) in Dean Street – and so on.

But back to Oz: the spate of ‘underground’ (aka counter culture) journals, comic-books and magazines at this time stemmed from the newish availability of offset litho printing presses, and the low-cost entry point they provided to publishing. The huge advantage of new technologies like the IBM Electronic composer – a type-setting machine that was a sophisticated electronic typewriter; – the Grant Projector (an adjustable vertical camera obscura for enlarging and reducing art-work); Letraset and other instant-lettering transfer technologies; Cow Gum – low impact adhesive for paste-ups, rostrum Process cameras – for photographing flat art-work and other pasted-up materials; scalpels and steel rulers (etc), meant that magazines could be created, written, edited and published almost anywhere. This not only offered economy of means, but also considerable artistic freedom, as illustrated perfectly by OZ magazine. 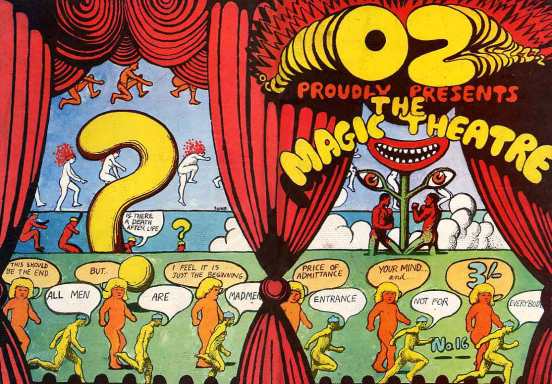 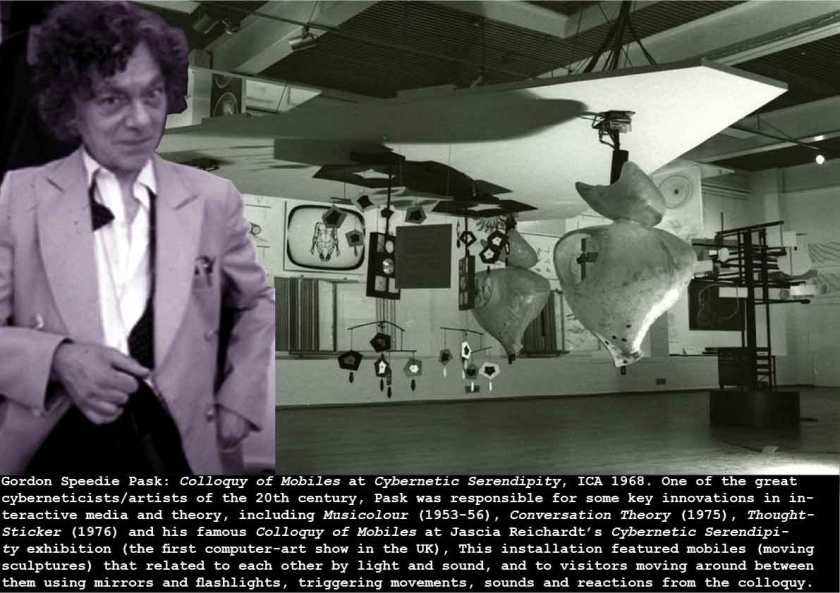 Pask is the prototypical new media artist for the 21st century. His talents embraced pure science and philosophy (Conversation Theory 1975); multimedia/synaesthesia machines (Musicolour 1953); idea-processing (Thought-Sticker 1976), large-scale interactive, cybernated installations (Colloquy of Mobiles 1968), and much, much more. Pask was one of the second-generation cyberneticists (with Stafford Beer, Heinz von Foerster, Jack Burnham, Ludwig von Bertalanffy etc), but was unique in that he produced artworks, machines and installations that embodied the very principles of feedback and cybernetics that were the subject of his theoretical investigations.

“In a field of brilliant eccentrics, Pask has no difficulty standing out… Pask is one of the Artificial Intelligencers who is working on teaching by computer, about which more will be said; but the original core of his interest is perhaps the process of conceptualisation and abstraction. Pask has done a great deal on the mathematics of self-contemplating systems, that is, symbolic representations of what it means for a creature (or entity omega) to look at things, see that they are alike, and divine abstract conceptions of them…”

For a good historical summary and future-projection of cybernetics see:

Kevin Kelly: Out of Control – The New Biology of Machines, Social Systems, and the Economic World 1994 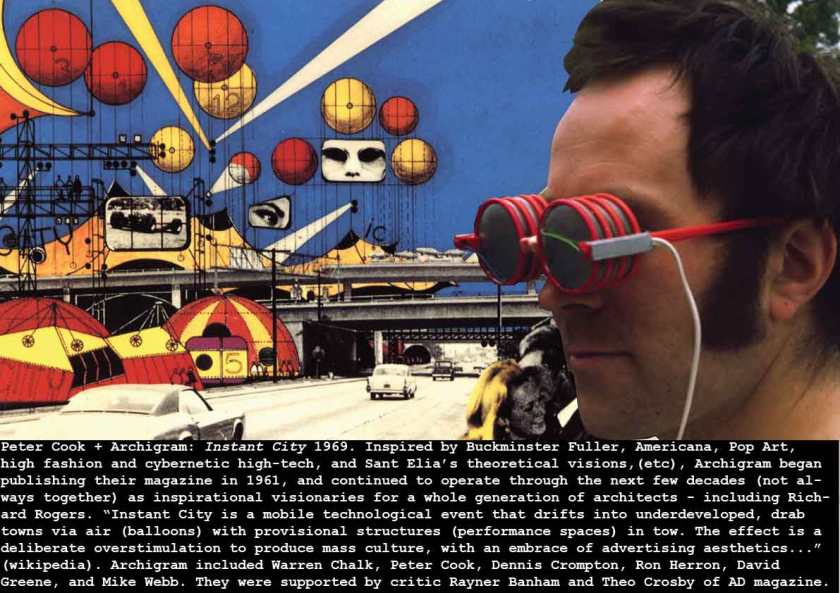 I was lucky enough to work with Dennis Crompton and Peter Cook of Archigram at MOMA, Oxford in 1969, on an exhibition of audio-visual experiments by students and staff working at the Hornsey College of Art Light Sound Workshop. Archigram were inspirational to my generation of students fascinated by the possibilities of what Dick Higgins later called intermedia. Archigram and Fluxus – and Architectural Design magazine,  and Moorcock’s New Worlds – and Buckminster Fuller, and Eduardo Paolozzi – the writings of Reyner Banham, Marshall McLuhan, Jack Burnham, the precision of Bridget Riley – these were the kind of artists we liked. Archigram were fun too – and like Cedric Price’s Phun City, this was a welcome attribute in art in the late Sixties. The only image I have of our MOMA show is this one sent to me by Tony Rickaby (who along with John Bowstead, Gary Crossley and I also collaborated on this show, which was featured on BBC TV Horizon. 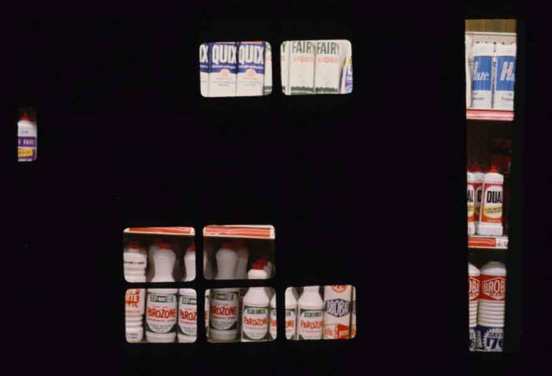 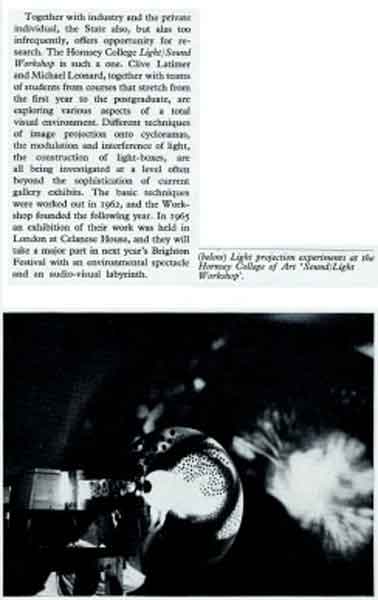 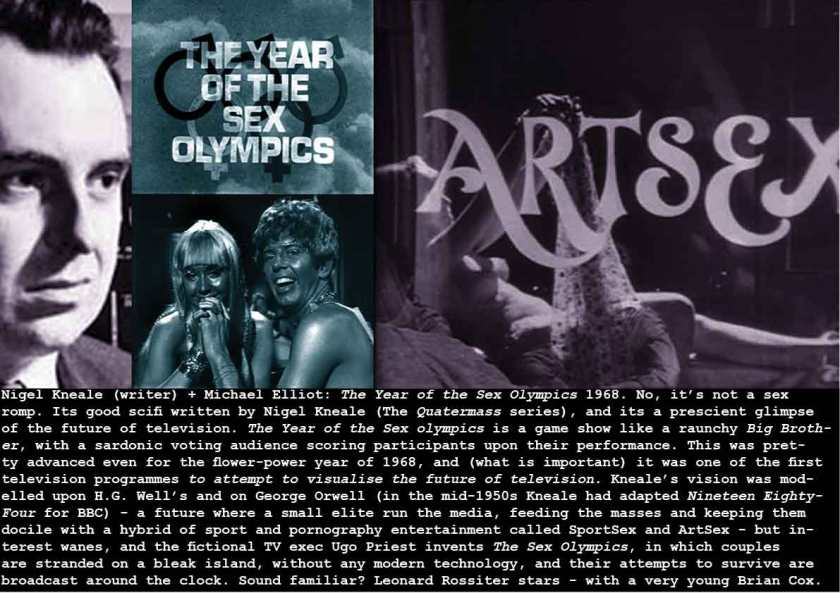 As I mention above, this was a real revelation to someone doing a post-grad year at the Hornsey Light/Sound Workshop, and fascinated with the potential of audio-visual and motion-picture media. The dominant media in any era seem to pass largely undetected by critical observers – (as McLuhan said – its the artists who appear always to be ahead of their time – and it takes longer for a critical response). And here we have two artists – Nigel Kneale and Michael Elliot – creating a show that is a remarkably prescient vision of where we are now – some 40 or so years later. There wasn’t another TV show like this until Orson Welles exploration of the potential of VR in F for Fake (1972) and John McGrath explored television chromakeying techniques in his delightful Adventures of Frank (1980). 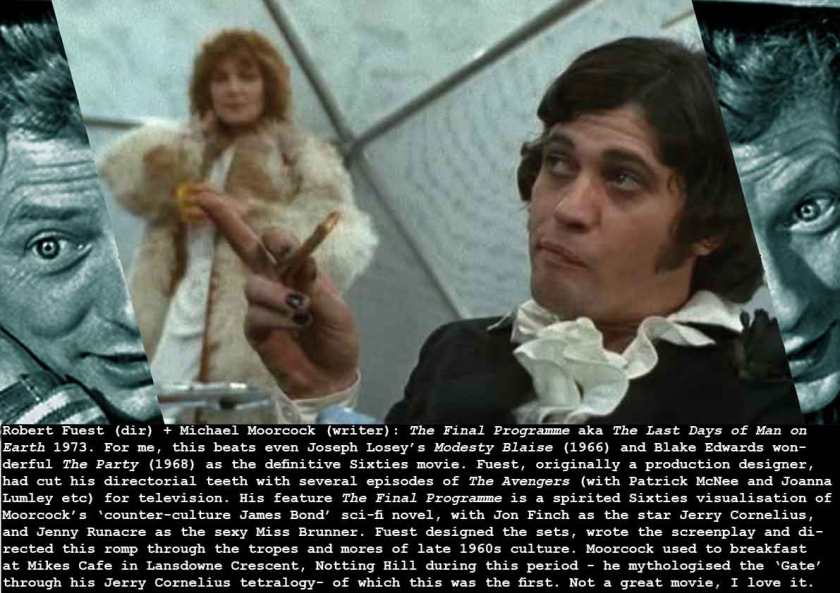 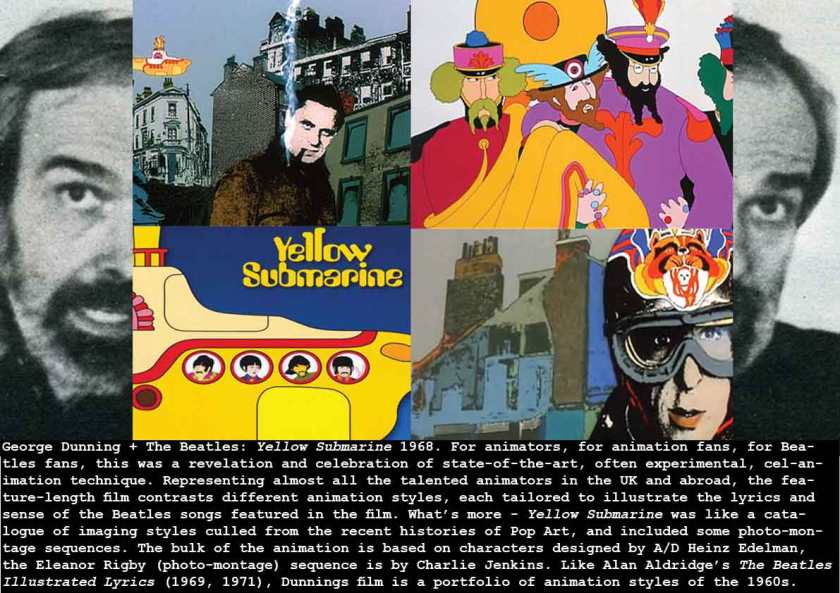 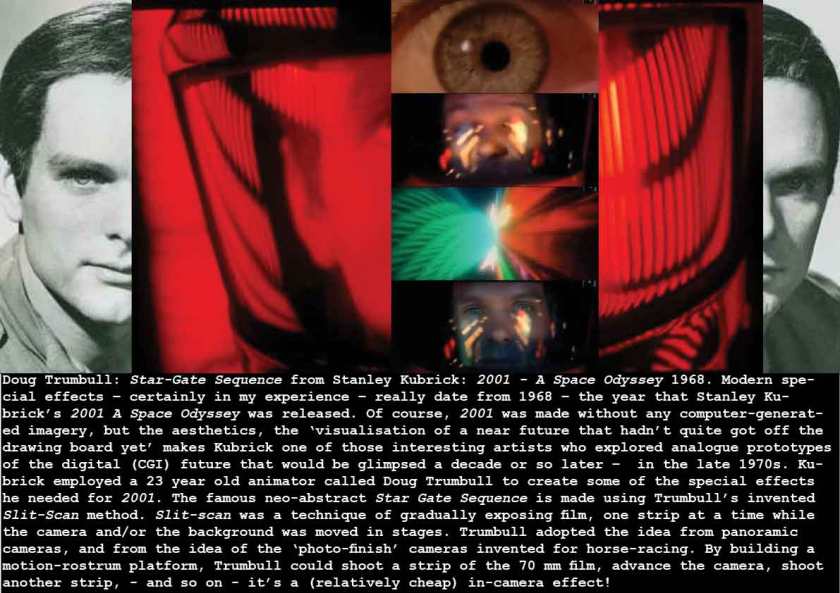 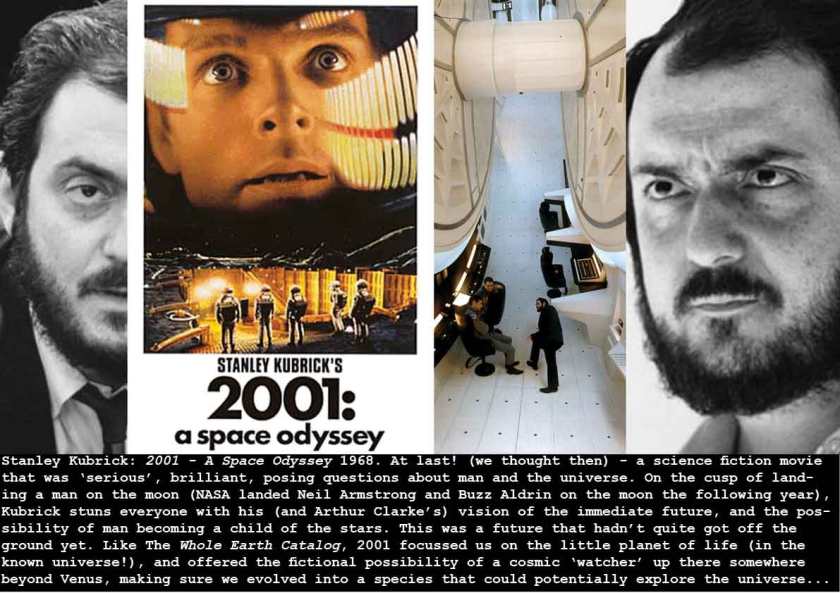 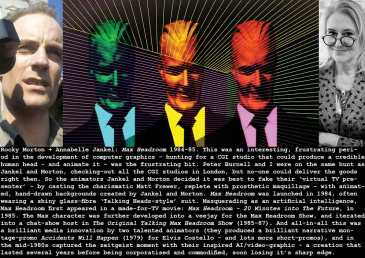 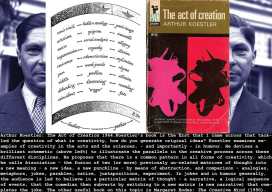 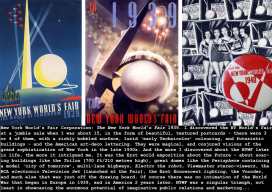 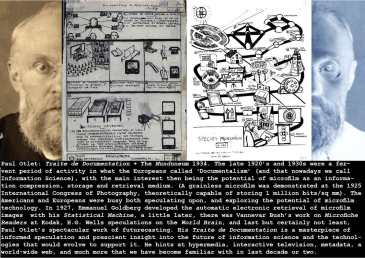 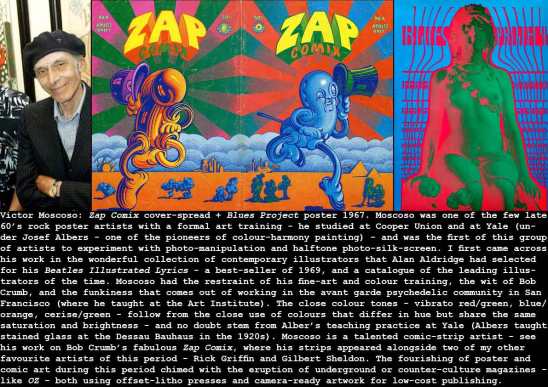